Lance Lynn did it again  onWednesday, making another impressive start to help the St. Louis Cardinals avoid a sweep at the hands of the Cubs. In four starts this season — each of which the Cards have won — Lynn has a 1.33 ERA with 24 strikeouts and an opponents OPS of .524. His opponents .203 batting average on balls in play won't be sustained, but none of that matters. Because he is the spitting image of 1983 AL Cy Young Award winner LaMarr Hoyt. 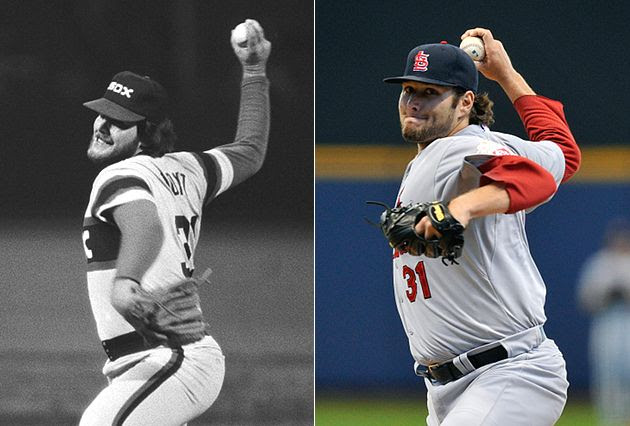 It's not exactly a reincarnation (however that's supposed to work), because Hoyt is still alive (age 57, seemingly against long odds). But the way Lynn looks, and to a degree his style of pitching, seem ... inspired ... by the ace of the Winning Ugly White Sox.

Listed at 6-foot-5 and 250 pounds, Lynn is mountainous hulk of a man with a beard and long-ish hair and a bit of a gut who looks like he just stepped out of a Grizzly Adams convention for a cigarette. Hoyt was a tad shorter at 6-foot-3, but he made up for it with a legendary beard, giant hair and a barrel for a chest. A native of South Carolina, Hoyt always looked like the sort who would know his way around a duck blind. Born in 1987, Lynn hails from Brownsburg, Ind., which sounds remote but is near Indianapolis.

There's a possibly apocryphal story of how Hoyt was discovered sleeping in the White Sox clubhouse the morning after they clinched the old AL West in' 83. A half-eaten burrito lay atop his sternum. I choose to believe it happened just like that. We'll see if any such adventures leak out regarding Lynn and the World Series season the Cards had in 2011.

Though not completely, their rock-and-fire pitching deliveries have lots of similarities. Hoyt relied on a sinker. So does Lynn. In what probably is a coincidence, but I prefer to consider fate, Lynn even wears Hoyt's uniform number — 31.

Another difference is how they get/got the job done. At his best, Hoyt had Greg Maddux-like command. In 31 starts in 1985, for example, he walked only 20 batters. Lynn seems to throw harder — he records a lot more strikeouts — but probably won't ever have the same control. Hoyt briefly was one of the top pitchers in the majors, but drug addiction killed his career by age 31. Though the scouts' optimism for Lynn's career isn't through the roof, there's certainly no reason to think he shares Hoyt's penchant for cocaine.

They also both go by their middle names: Michael Lance Lynn and Dewey LaMarr Hoyt. ("Dewey." Awesome. Here's another factoid I can't let go of: Did you know that, on the 1981 White Sox, they had Dewey LaMarr Hoyt, slugger Lamar Johnson and another pitcher named Dewey Robinson? Holy six degrees of Kevin LaMarr Bacon!)

Before our presentation ends, be sure to check out a video that includes a recent interview plus highlights of Hoyt pitching during 1983 ALCS. Those White Sox were one of the coolest non-champions in history, and a lot of credit goes to Hoyt — the mountain man atop the hill: